More than half of the world’s population lives in cities. Urbanisation has also been a strong trend in Finland since the 1960s, with approximately 70% of the Finnish population now living in cities or their surrounding areas. The migration to growth centres is still going on. The accumulation of people in dense urban centres with good public transport links is beneficial for the environment and essential for economic growth.

Kojamo Group’s new residential development activity is focused on high-growth urban centres, the most attractive of which are the Helsinki Metropolitan Area and other major growth centres. The demand at these locations is focused on small rental apartments situated in or around city centres, with good transport links.

Following the example set by many cities internationally, Finland’s former industrial and port districts are transforming into trendy neighbourhoods.

In recent years, areas located near city centres that were formerly used for industry, warehousing and transport have been converted to residential use. This trend has been particularly strong in the Helsinki Metropolitan Area, as exemplified by the redevelopment of the former logistics districts of Kalasatama and Herttoniemenranta. Following the example set by many cities internationally, Finland’s former industrial and port districts are transforming into trendy neighbourhoods in the Helsinki Metropolitan Area as well as elsewhere in the country.

Redeveloping these districts into modern residential neighbourhoods gives them a new lease of life. It also frees up valuable waterfront property for local residents’ use in a new way. The redevelopment of Kalasatama, for instance, will create a six-kilometre seaside promenade on the eastern side of Helsinki’s city centre.

Located on the shore of Kruunuvuorenselkä bay, Kalasatama is one of Helsinki’s newest residential neighbourhoods. It is being developed in an area that was used for industrial activity and port operations for nearly 200 years. When the port operations were relocated from Sörnäinen to Vuosaari, the area was freed up for residential development. The first new residents moved to the neighbourhood in 2012. Located to the south of the Eastern Highway, Sörnäistenniemi will be the first residential area to be completed in Kalasatama.

The redevelopment of Kalasatama will continue into the 2030s. Once completed, the district will be home to 20,000 residents and some 8,000 people will work there. The transformation of Kalasatama into a neighbourhood of housing and services will also have a dramatic impact on Helsinki’s skyline. The Redi shopping centre complex, which will be constructed over the Eastern Highway, will include apartment towers as high as 35 storeys. Transportation in Kalasatama will rely on tram lines in the future. During the construction phase, however, buses and the metro are the available modes of public transport. Kalasatama’s modern infrastructure also includes a pipeline-based waste collection system.

The developers and designers of new neighbourhoods are usually selected by means of architectural design competitions. This was also the case for the apartment block at Capellan Puistotie 4, which Kojamo Group won with designs created by the architectural agency Anttinen Oiva Arkkitehdit. Completed in autumn 2015, the building has an excellent waterfront location next to the pedestrian bridge to Mustikkamaa island.

Capellan Puistotie 4 comprises 44 apartments, some of which have a direct sea view out to Kruunuvuorenselkä bay. The shared facilities on the rooftop include a multipurpose space, terrace and sauna. Business premises on the ground floor will increase the availability of local services. The projected population of Kalasatama is large enough to create plenty of demand for services within the neighbourhood. 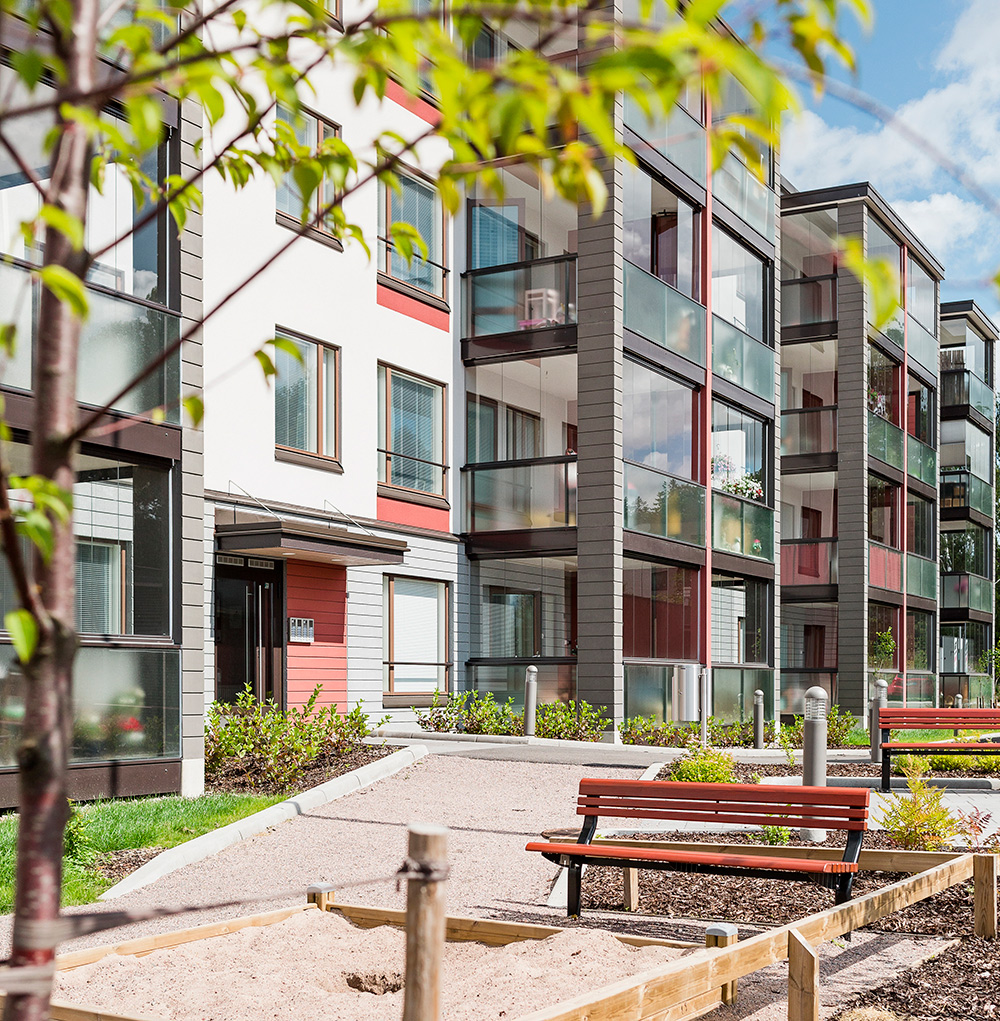 Antoninkuja 3 is located on the boundary of the Pajala neighbourhood in a building that features a red brick exterior on one side and a white plastered exterior on the other.

Bjarne Westermarck, the owner of Järvenpää Manor, established industrial operations in the Pajala district in the early 1900s. One of Järvenpää’s oldest industrial buildings – a former rubber factory that now houses a centre for small businesses operating in the creative industries – still stands in the Pajala district as a relic of the past. The craftsmen and other creative entrepreneurs based in the centre are keeping Pajala’s legacy alive.

This old industrial district is now the site of residential development at a location that is within walking distance of Järvenpää’s city centre and the railway station, which provides access to Helsinki with a travel time of just half an hour. The services around the new apartment blocks include grocery stores, schools, day-care centres, a music institute, indoor swimming pool, library and indoor ice rink.

The Lumo apartments at Antoninkuja 3 are located on the boundary of the Pajala neighbourhood in a building that features a red brick exterior on one side and a white plastered exterior on the other. The four-storey building was completed in autumn 2014 and it comprises 44 bright and classy Scandinavian-style apartments. The apartments include studios, one-bedroom units and two-bedroom units, and they all have glazed balconies.

Residents also have access to good shared facilities including a sauna, washing house, drying room and storage space. There is a pleasant playground area in the inner courtyard.